Each Morning I Pray to the Microwave

Years ago I saw a play where a character prayed to a microwave. I thought it was a hilarious spoof on religion. The scene stayed with me, planted the seed of a poem. I wanted to continue with the humor, the over-the-top-ness of it. I played with the idea of a competition between god and a potato:


"I prefer God to a potato most of the time"

A pretty outrageous comparison that I hope makes the reader smile. I thought about the fact that both God and a potato have eyes and felt that would be fun to include.

After the first few lines, the speaker spins out into a tangled personal story of a failed relationship:

I wanted to show the speaker's life is chaotic like the lines in the poem, zigzagging from "a failed science experiment" to a cat who "rarely uses its litter box." The speaker is trying to sort through the chaos to find some solid place to stand. The best she can find is the blurry God who may or may not be a potato.

The poem is meant to be humorous, not sacrilegious. I hope that comes across (click on image for larger view): 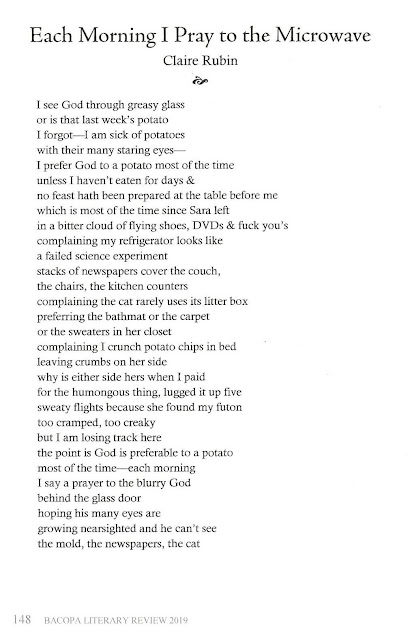 Claire Scott Rubin, our 2018 Poetry First Prize winner, has received multiple prizes and Pushcart Prize nominations. Her work has been accepted by the Atlanta Review, Bellevue Literary Review, Enizagam, Causeway Lit, New Ohio Review, and Healing Muse, among others. She is the author of Waiting to be Called and Until I Couldn't.
Posted by Mary Bast at 4:03 PM No comments:

You Had Me At Hello

In the 1996 film Jerry Maguire starring Tom Cruise and Renee Zellweger, she uttered a line that I and many others would never forget: "You had me at hello."

Likewise, Hugh E. Suggs, author of "From One Field to Another" in the 2019 Bacopa Literary Review contest, had me at hello:

The afternoon they took Daddy away to die at the VA, I just sat stunned beside that leased hospital bed in the Florida room we'd built together. The shape in the disheveled mattress, way too small for the void left behind.

From the last words of that introduction, I assumed I was about to read a poignant portrait of a beloved father who was missed deeply, and the story did not disappoint. Suggs continued painting a picture of his daddy with a a vivid brush as he showed how perseverance and optimism pulled his young father through hard times.

Daddy became good at looking ahead, to where he was going. That was all he could do in all those fields plodding behind that mule. That, and hold on tight. Because there was one thing for sure, there'd always be more dirt to plow and better days, somewhere ahead. Days when no one would beat him. Days without hunger in hollow places. Some that ached, others that pinched. But despite every injustice he'd suffered, every time he felt the strain of it all, he just kept believing. And he later reminded me--that you, and the rows you plow in this life, must not get bent.

That paragraph resonated with me since my own father, a farmer, endured some of the same trials as the father in this story, and mine was also adamant that his rows be arrow straight.

I was pleased to nominate "From One Field to Another" for First Prize in Creative Nonfiction and delighted that it came from Writers Alliance of Gainesville's own Hugh E Suggs.

Humor is an icebreaker. It brings people closer, it makes people feel good. It relieves pain and transforms the way people look at the world. "Seven Ways to Become a Master Humor Writer When You Don't Think You Have a Funnybone," Sarah Cy, The Writing Cooperative.

Even if the history of your own funny bone involves that awful twang of ulnar nerve bumping against humerus--definitely NOT humerous--you've certainly experienced the joyful release of out and out laughter when reading something well-written and funny, from subtle satire to sappy slapstick.

You also "get" why the best cartoons make us laugh. It's the element of surprise, the shift from the brain's usual track to a fresh perspective. That can happen with good writing, too, even if it's not a version of stand-up comedy. Think of those memories that bring a smile to your lips and tears to your eyes. Writing with inherent humor might bring on nostalgia, anxiety, grief, joy, or a host of other emotions.

We're smiling because we've added a new editor to our 2020 team, Stephanie Seguin, winner of Bacopa Literary Review 2012's Second Place in Fiction, among whose many talents is humor writing. Even in fiction that's not outwardly intended as "humor writing," you'll find her adept with external/internal dialogue that surprises and/or makes you smile:


Kylie rolls her eyes. The girl isn't even walking right. Zombies don't hold their arms stiff out front like a mummy. Mummies hold their arms like that because they are wrapped, their elbow joints constricted. Zombies' arms hang limp at their sides. . . . (Stephanie Seguin,"Skank," Penduline, Issue 5.)

In this same piece, notice the author's playfulness with language:


She heard the word so many times it had shaken loose its husk and become something else, like when you repeat the name of a common object over and over until melts into something foreign, something that sounds strange to your ears and feels odd in your mouth.

*     *     *
Stephanie Seguin, received a B.A. in English and French from the University of Florida. Her dormant humor blog will soon be back online, featuring relevant topics such as fake collectible primate babies and rubber truck testicles. She lives in Gainesville, Florida, where she writes, mothers, and conspires to overthrow tyranny.


by Senior Editor Mary Bast
Posted by Mary Bast at 12:27 PM No comments:


Michael Dylan Welch has served as Poet Laureate for Redmond, Washington, and runs National Haiku Writing Month and his website Graceguts, devoted mostly to poetry. His poems, essays, and reviews have appeared in hundreds of journals and anthologies in more than twenty languages. He lives in Sammamish, Washington.

Raphael Kosek, "When the saints come among us" (Poetry)


Avra Margariti is a queer Social Work undergrad from Greece. She enjoys storytelling in all its forms and writes about diverse identities and experiences. Her work has appeared or is forthcoming in Daily Science Fiction, The Forge Literary Magazine, The Journal of Compressed Creative Arts, Argot Magazine, Glintmoon, The Arcanist, Flash Fiction Online, Terse Journal, 50-Word Stories, pif Magazine, and other venues.


Jeff Streeby is an American poet and haibunist. His mixed-form collection, An Atlas of the Interior, is available from Unsolicited Press. His chapbook of haibun, Wile: Sketches from Nature, was published by Buttonhole Press. Streeby is an Associate Editor for poetry and prose at OPEN: Journal of Arts & Letters.


Miranda Sun is twenty years old. An alumna of the NYS Summer Young Writers Institute and Kenyon Review Young Writers Workshop, her work has been nationally recognized by the Scholastic Art & Writing Awards and published in Body Without Organs, Lammergeir, TRACK//FOUR, Red Queen, riverbabble, Sobotka, YARN, The Gravity of the Thing, and more. She loves bubble tea and aquariums, and currently reads for Ninth Letter Online..


Ed Coonce is an Encinitas CA artist, writer, actor, and the Creative Director for Theatre Arts West. An alumnus of San Diego State University where he studied art and anthropology, he hosts a weekly meetup, East Hell Writers.

by Senior Editor Mary Bast
Posted by Mary Bast at 2:08 PM No comments:

The short story should consider staging its own kidnapping and then show up three weeks later in The New Yorker claiming that some things happened that cannot be discussed. [Short stories] are better than the novels I've been reading. They are more daring, more artful, and more original. Yet while I know plenty of people with whom I can discuss novels, there are only two people I know with whom I can swoon over short stories. . . Ann Patchett, foreword, The Best American Short Stories 2006.

Short stories have a special place in literature, not pint-sized or incomplete fiction, but a genre all their own. In calls for submission we've emphasized the construction of a good short story as "tight and concise writing that includes characterization, conflict, change, and draws in readers with its depth, clarity, and powerful, authentic voice." To describe how those components lead to daring, artful, and original work, however, is not an easy task.

Paris Review's "The Art of the Short Story" cites Ernest Hemingway's preface to a student's edition of his short stories:

"There is very little to say about writing short stories . . . If you can do it, you don't have to explain it. If you cannot do it, no explanation will ever help.
A few things I have found to be true. If you leave out important things or events that you know about, the story is strengthened . . . But it is all there. It is not visible but it is there."

Do you see? Important events have seemingly been left out, yet the story is there.

It is this quality, along with her elegant writing, that drew me to 2019 Fiction First Prize winner Avra Margariti's 890-word story, "The Calligrapher." All is there, though not visible: 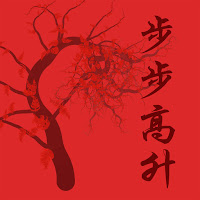 "Ink clings to the bristles of Mihiro's brush, hovering over the parchment on top of her varnished heartwood desk. The kanji blossom like flowers in a midnight garden . . ."

We know immediately that Mihiro is not simply a calligrapher, but one whose work is artful. We learn scant details of Mihiro's relationship with boyfriend Robert, that he has a firm handshake, that "his work takes him to the West Coast, where he closes deals and fattens his bank account."

All is not well between Mihiro and Robert, but instead of documenting specifics, Margariti implies the action though the metaphor of calligraphy:

" . . . her fingers curl around a sturdy brush handle. She begins working on her commissions, only to halt when she glances at her right wrist. An inkblot that looks like a bruise, is her first breathless thought, but no.
A bruise that looks like an inkblot . . .
She doesn't remember sleep dragging her eyelids shut, but knows something is different.
Her hands--those fragile things Robert so likes to swallow in his own strong palms--are stained black and gray. Love, life, fate: every line on her palms stands in relief, so that her hands look like cracked earth, like something powerful and tectonic. . .
Scrambling to her feet, Mihiro takes in more of her body. . . The still-wet kanji overlap with each other and blend with the now-fading bruises. More words emerge right before her eyes, written in the sure swirls and swipes of an invisible calligraphy brush.
On her body is a story that Mihiro has yet to read. To her surprise, it's a story she wants to know."

And this is where Margariti's words end, though of course we readers know what is there.


*     *     *
Avra Margariti is a queer Social Work undergrad from Greece. She enjoys storytelling in all its forms and writes about diverse identities and experiences. Her work has appeared or is forthcoming in Daily Science Fiction, The Forge Literary Magazine, The Journal of Compressed Creative Arts, Argot Magazine, Glintmoon, The Arcanist, Flash Fiction Online, Terse Journal, 50-Word Stories, pif Magazine, and other venues.
Posted by Mary Bast at 11:09 PM No comments: