CLICK HERE FOR SUBMISSIONS PAGE
Posted by Mary Bast at 11:22 AM

Visual poetry bends the script, the letter, the consonants, the vowels. It allows for a from oral tradition to written text to imagery of the written text. Modern visual poetry is as dynamic and diverse as any art form. It can, but does not have to push a dialogue (dialect?) between visual arts and literature, between representation and abstraction, between constructions and deconstructions.

Visual poetry spans lettering, typography, handwriting, and collage. From the typestracts of Houedard and other typography (Figs. 1 & 2) to concrete poems and calligrams (Fig. 3) that recapitulate the shapes of objects and things, visual poetry allows for a dynamic interplay that connects the eyes and ears in the experience of poetry (click on images to enlarge).

Visual poetry also has a rich history of rebelliousness, whimsy, social commentary, and even scathing political exposure. As stated by Derek Beaulieu, "The libidinal excess typified in concrete poetry is not tied to a biological author, but rather to the excess and waste caused in the production by business machines of 'correct' and legible documents." (Beaulieu, The Last VISPO Anthology: Visual Poetry 1998-2008, pg. 75)

Many visual poets chafe at "accepted conventions of Poetry," and seek to challenge and push boundaries of subject and object, form and function. The "distortion" of text into a visual aspect that cannot be separated from the text itself can be seen as an echo of the "conceptual structure of reality" espoused by Hegel.

If things exis for actualizing "a priori pure concepts," visual poetry can provide potentially unanticipated sources of "sense impressions" that seem to hint at our social reality.

For additional information concerning visual poetry and examples see Visual poetry: what it is and examples, Visual Poetry Today, The Vispo Bible: John, and Guillaume Apollinaire.

Bacopa Literary Review is interested in exploring this form and is currently accepting submissions in Visual Poetry. Due to current considerations of cost and printing, in this cycle we can only consider poem images in black and white that can be reasonably reproduced in a 5 x 8 inch page format.

An Act of Discovery

Writing is an act of discovery. -- Natalie Goldberg

My essay "Little Bird" in Bacopa Literary Review 2021 is a vignette about a moment in my life so small that I doubt anyone else involved even remembers it. Yet it was a pivotal moment for me, one that confirmed something I had begun to suspect in adolescence. I was different from other boys. I was a misfit on my baseball team--inept, passive, and introverted. In the dugout I found a fledgling baby bird and vowed to save it from two teammates who were unlike me in every way.

Nick and Scott were best friends, and like me, were thirteen. Unlike me, they were very good ballplayers. Nick was a small, wiry, slap hitter who could turn singles into doubles. His father owned our town's biggest car dealership. Scott was tall and broad, a big bruiser of a kid who had set records crushing homeruns his last year of Little League. He had gained infamy in sixth grade by tasting a piece of the cow heart we were dissecting in science class. Today, he's a cop.

I failed. They found the bird and decided to take it to the high school field to "park it." For years, that incident proved to me that I was tender-hearted and virtuous. I never challenged the assertion; I built my identity around it. When I finally decided to write about it a few years ago, it started as an exercise in recollection. Gradually, my memory and imagination collaborated to the point where I could smell the wet grass and hear the scrape of aluminum bats on concrete dugout floors. But I kept writing, and as so often happens in writing, seeing the thing on the page took me places I did not expect.

That day on the baseball field was twenty-five years ago. When I relived it in my mind, I was always the hero. But when I wrote it as a narrative, I scrutinized my protagonist a  little more. His passivity was not a virtue, but was a flaw that allowed an innocent creature to die.

The final lines of the essay were not just a surprise twist to the reader, they were a surprise to me. A surprise I discovered in myself through the revelatory power of writing.

Adam Knight is a writer and teacher in northern New Jersey. His debut novel, At the Trough, was published in 2019 by NineStar Press and his fiction and essays have been published in a number of publications. His story "Hoping for Red" was published at Escape Pod in December 2018. He has recently completed a cosmic horror novel about the Titanic, The Fire Below the Waves.

The House: An Essay on Labor and Loneliness

On certain quiet after-midnight hours I hear the place where I live express itself audibly: wooden joints creak, old pipes groan, wind sifts through cracks. My home comes alive for me during these times. And I become not only an inhabitant and a caretaker of the space, but also a fellow living organism in conversation with the dwelling. In my poem, "The House," I explore the tension of this relationship and the impact labor and loneliness have upon that connection. My abode is "belligerent upon disruption," waiting "to be--cajoled into being." The building itself has expectations of its dweller and the narrator must navigate those burdens.

I was especially inspired by works such as "Pensive Hours" by Bamewawagezhikaquay (also known as Jane Johnston Schoolcraft), "Those Winter Sundays" by Robert Hayden (born Asa Bundy Sheffey), and "My Grandmother's House" by Kamala Surayya (popularly writing under the name Madhavikutty). These poems deal with the interiority of human lives as they experience kinship, employment, and gender structures.

Joys and griefs are measured through the lens of home. Meditation and the natural world are juxtaposed with isolation and broken bonds within the domicile. For instance, the poet Surayya imbues her grandmother's house with personality. "There is a house now far away where /  once I received love / ... How often I think of going... / [to] pick an armful of / Darkness to bring it here to lie / Behind my bedroom door like a brooding dog." The building becomes more than an enclosure. The love and care experienced within provide character to the four walls.

However, for the person accomplishing the family chores, "Hours stretch --- / ... Days tumble-- / Halls become tunnels through which my life / walks without me." As Schoolcraft writes in "Pensive Hours," a life lived indoors can feel isolating: "The sun had sunk in a glowing ball / As lonely I sat in my father's hall." So often those performing domestic labor go unnoticed, something Hayden expresses beautifully in "Those Winter Sundays," "Sundays too my father got up early / ... then with cracked hands that ached from labor in the weekday ... made / banked fires blaze. No one ever thanked him."

In my poem "The House" I wanted to hold these contradictions of love and loneliness, labor and leisure within tight proximity.

Atreyee Gupta explores the liminal spaces in which humans interact with society, geography, and identity. Atreyee's work has been published by Arc Poetry, Blue Cubicle Press, Rigorous, Jaggery Lit, and Shanghai Literary Review among others. For a fictional treatise on isolation and belonging, you can read Atreyee's short story, "Cocoon," published by Apparition Lit in their Wonder Issue. For other works, check out Bespoke Traveler, a digital alcove for curious travelers.

My story "The Healing WAVE" is a coming together of two separate threads. I'd been reading a lot of Saki, the Edwardian short story writer, since the start of the pandemic, and found more than ten instances where he had built a plot around someone telling elaborate lies--often a teen lying to an adult. I wanted to try something similar, but fact checking has become so easy in the internet age that such a plot would hardly be tenable. For this reason I decided to make my protagonist a Luddite around 1999.

I love the idea of trickle-down holiness, and thought it would be funny to transfer it to a secular context. Britney Spears was one of the biggest celebrities in 1999, so she became my saint, and a boy who touched her pants thereby became a third-degree relic with healing powers.

The line, "I've seen people wearing the letter 't' on a chain around their necks, but those were never authorized," was problematic for the Bacopa editors, because normally one would have written "the letter T," capitalized without quotation marks. I'm grateful that they retained the lower-case because the letter T needs to look like a crucifix for the joke to work.

David Partington is a newly retired zookeeper who has taken up short story writing as a pandemic pastime.

Emissary on the Wall

I remember sitting on my living room couch at around 1:00 AM, looking at the ceiling and pockets of space where I might find an idea to craft a poem. That part is always the most painful--the waiting, knowing for certain I am going to create something before being able to sleep but not having any clue what it is. Even after the idea comes to me and I'm in the process of putting it into words, this intense itching feeling persists. I don't think I've ever related more to a sentiment about writing than Dorothy Parker's epiphany, "I hate writing, I love having written." 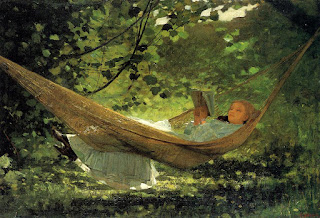 I had zoned out visually at that point, lost in my own 1:00 AM jumbled mind, when my eyes came back in focus, and I realized I had been staring at the painting of a girl hanging above the mantel for over 5 minutes. Maybe I wasn't completely zoning out. Maybe my subconscious was waiting for my thoughts to catch up. Either way, I identified that silent painting as the cause of my itch and began the process of giving it words.

I was inspired by the idea of contrasting motion with stasis--how things we believe to be crystallized in memory are actually constantly adjusting and evolving to accommodate present day. Many people comment on how the past affects the future, but I wanted to illuminate how this relationship is bidirectional, the moments we admire and observe like paintings are constantly looking back at us, affected by our current realities, emotions, and psyches.

. . . Now I notice how her ears perk up to eavesdrop, the spy, like poison weeping from the vial, like an antidote; every word we giggle into handfuls of midnight, hieroglyphic salt stains that whisper on the couch cushions, the shivers annexed from our minds during sleep. 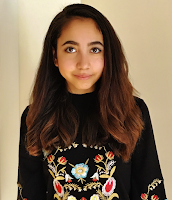 As an undergraduate writer, I am beyond honored to be able to share this piece through such a highly regarded literary journal. As of December 2021, I am published/forthcoming in more than thirty literary magazines around the world. Some recent publications include PINK N♀ISE, published in Rust + Moth Magazine and "Nautilus," published in Perhappened Magazine. To read more of my work, head over to my website and subscribe for free updates.