Try not to resist the changes that come your way. Instead let life live through you. And do not worry that your life is turning upside down. How do you know the side you are used to is better than the one to come?
--Rule Thirteen, Forty Rules of Love as taught to Jalal ad-Din Rumi
by the wandering dervish, Shams of Tabriz

The worldwide perspective of this year's Bacopa Literary Review arises from a great diversity of authors' ages, backgrounds, gender identifications, and countries of origin--from Australia, Canada, China, Germany, Greece, Ireland, Israel, Japan, Nigeria, Tunisia, U.K., and from coast to coast in the U.S. As a result, it's not surprising to find reference to displacement and immigration across genres.

In the current editorial team's four annual issues, each year's world events have been reflected in submissions, from 2016's disorientation and anxiety, to 2017's concerns about the environment and human suffering, then to 2018's accusations of a culture ignorant of reverence where so much is wrong, culminating in 2019's works that bemoan universal wrongs.

Rumi's Rules of Love are introduced in Batool Alzubi's "Illegally Alive," whose protagonist thinks, These quotes are for people with a bearable amount of sadness... my life wasn't only turning upside down, my life was falling out of my hands.  Yet, the mother, daughter, and son in this story do bear the sadness of leaving their Syrian town, and a treacherous first crossing in their exodus to Europe.

An immigrant boy's fate is more tragic in CB Follett's "Photograph of a Very Young Boy," as there were too many waves and each too big... this was never the escape he was promised.

In "Everything About Today is Violet," Ojo Taiye tallies the costs of geographic borders, lamenting that yesterday is one place to bury two million undocumented displaced children.

In "A Simple Sea Song for my Father," Jennifer Grant deepens our view of the sea as a gulf of unfinished stories. This is one of several works about lost fathers and mothers, most in grief, some in relief. B.W. Jackson's Jacob has cared for his invalid father since his mother's death, eyes opening to the beauty and character of the family home as he has gradually restored it. River Kozhar's cats have provided lifesaving company, from childhood to adulthood, in the face of her parents' gaslighting. Edward M. Cohen's Shiva after the mother's funeral was sparsely attended because she had done so much complaining in her final years that most of her friends had drifted away.

Threaded throughout this issue you'll find a variety of Haiku, whose very nature emphasizes the Yin-Yang balance of existence: nothing is all bad or all good; instead, these apparently opposite qualities are intertwined.

sparrowhawk fence
an ending to the summer
as leaves start to stutter (Alan Summers, p. 39)

There is also much joy in these pages, from "A Soundtrack for Early Motherhood," through "Cool Party Mix" and "Kiss Rehearsal," to a "Middle-Age Cartwheel." Even the loss of a parent can be held dear, as in "My Father's Irises" by Sayuri Ayers: ...a bulb / in my hand, its roots / clinging to my fingers. And Raphael Kosek reminds us the saints still come among us, When... the cry of the hawk punctuates / our sleeping and our waking, / calling us to all that is unnamed / but keener than a slim blade / piercing the only body we know.

With our 2019 issue, Bacopa Literary Review rejoices in ten years of publication. To celebrate, below are our First and Second Place prize winners from each year (follow links for more about the authors and/or the works): 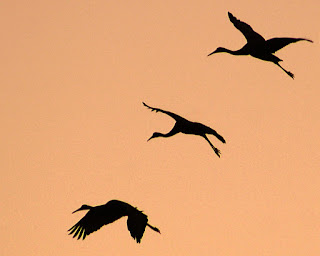 Our Haiku & Mixed Genre Editor Kaye Linden wrote about haiku when we were preparing for submissions in the early spring, inviting this ancient form as one of our genres for the first time in our ten years of publication.

We didn't know then the degree to which the haiku in this issue would provide a yin balance to a yang theme, across genres, of displacement and immigration.

Thus it seems propitious that we are also graced with the photographic art of Michael Allard's Sandhill Cranes for our 2019 cover, cranes often the subject of traditional haiku.

Please take a moment to listen to the many sounds of cranes, announcing their presence with loud, rattling bugle calls. Their repertoire includes honks, moans, hisses, snoring, and--from the chicks--trills and purrs.

It's been said that when cranes appear, there is something in our lives we need to pay attention to. Our editorial staff brings your attention to Bacopa Literary Review 2019, now available in print and soon to be offered in digital form.