Found Poetry: The Literary Equivalent of a Collage


A successful found poem doesn't simply repeat information. Instead, the poet engages with the text and offers a new context, a contrary view, a fresh insight, or lyrical and evocative writing. Just as plastic bottles can be recycled to make a chair, the source text is transformed into something completely different. ("Introduction to Found Poetry," Jackie Craven, ThoughtCo.

As mentioned in an earlier post, our "From the Editor" pages in Bacopa Literary Review 2018 included Senior Editor Mary Bast's found poem devised of key phrases from that issue's content. We accept found poetry submissions, and our 2016 issue featured Reading Between the Lines of A Tale of Two Cites, where Bill Waters created the additional visual effect of superimposing his found poem over the original text (click on image for larger view): 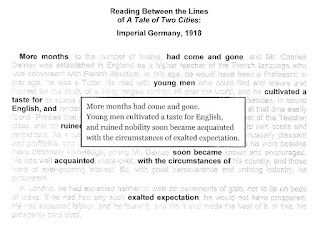 "Found" poetry is created by refashioning and reordering words or phrases from existing text, changing spacing and lines, adding or deleting text, and imparting new meaning, using any poetic form. The Teachers and Writers Handbook of Poetic Forms has a section on found poetry guidelines, and there's more online. For example:


A pure found poem consists exclusively of outside texts: the words of the poem remain as they were found with few additions or omissions. Decisions of form, such as where to break a line, are left to the poet.

Found poetry is the literary equivalent of collage. Much like the visual artist who combines multiple media (newspaper, feathers, coins, sheet music) into collage art, you can do the same with words, pulling concepts and phrasings from various sources to create "found" poems.

Although there are found poets who create this type of work as a literary exercise, most visual artists do it to create a work that is both meaningful and visually pleasing.

A specific type of found poetry is the cento, composed of lines from poems of a single poet or many poets. The word cento comes from the Latin for patchwork quilt or curtain.

Among many other forms of found poetry are erasure poems, which eliminate everything from a page or pages except the words that make up the poem, accomplished by white or black tape, various colors of paint, etc.

During a National Poetry Month project with the now defunct Found Poetry Review, I combined found poetry and haiga in six found haiku, created by mixing up lines and words from English translations of Japanese haiku masters Matsuo Basho, Yosa no Buson, and Kobayashi Issa (click on image for larger view): 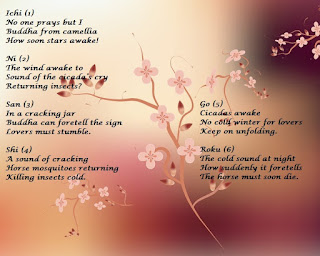 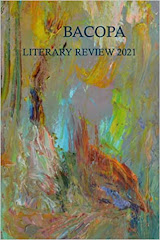