What Aches: A Special Affection for Place 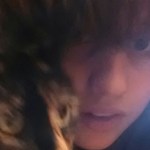 These sentences of what aches, below, broken into a verse, are (of course) formed due to memories. I expect I'll always be the kind to think that memories are a marvelous place to dwell. Of course, one might embrace a certain number of ideas over a lifetime, and these are often so broad they may account for a great amount of devotion in a person--religiosity or spirituality might come to be foundational for much of one's worldview and therein one might cultivate all sorts of emotion. Also, one might love people, which is particular though not small.

Place, though, fits somewhere in between, and I have a special affection for place, perhaps because it answers naturally to one's spiritual affectations while maintaining real substance and form, and as such, just being somewhere can be like contact with the beyond. Perhaps because mountains do not "feel" in return; they simply are, set against the sky. Here was something that was greater than anyone, but still I felt particular towards: I spent some time in "the hills" of Elizaville and Milan, in the wintertime, a landscape to which I suffered in addiction, one that I considered sacred and even now am still glad of, and mourn.

Eventually, however, I reached an end and due to my complete commitment to these brown hills and staccato power lines, I suffered from an illness profound enough to take me from this sacred place. It was a heartbreak derived from the thing I loved, from the insanity of my continuous destructive and holy escape, that caused me to part from it, not due to the end of desire but due to my own extinguishment, as paralleled by the limitations of my body, and thereafter I was as weak as an old man, moving slowly about an 18th century farmhouse, nearly falling through the white wooden floors, always in the delirium of loss, and beginning to summon ghosts with my thoughts. This was an easy death; this was the inevitable and sought-after end.

Of course, this was all but a tremendous mental exercise and even writing here demonstrates the extent to which one might come to delude oneself in the pursuit of meaning or feeling anything after all. Still, were you to ask if I believed in anything, I'd say: "the hills." 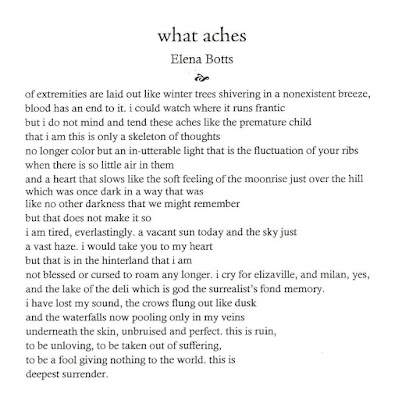 *     *     *    *
Elena Botts is author of six published books, winner of four poetry contests, her poems have appeared in dozens of literary magazines (including Madness Muse Press, The Opiate, ), and her award-winning visual artwork exhibited in various galleries. She's collaborated on, released, and exhibited sound and moving image art.