I am grateful to Bacopa editors to have had three haiku sequences in the 2019 issue of the journal. They are "Shēngxiào / 生肖," "Haiku Lessons," and "Still I Go." I'd like to share a few words about each of them. 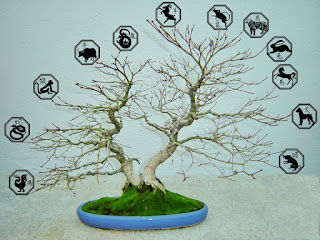 I wrote the first sequence at the very end of December in 2017 when the turn to the new year was high in everyone's consciousness. The year of the dog wasn't set to start until February 16, 2018, but the Western new year of January 1 got me thinking about the year of the dog a little early. I also knew my birth year was the year of the tiger. But I found myself curious about the other years and started surfing online to learn more.

Along the way it occurred to me to write a haiku for each of the twelve Chinese zodiac signs, also called shēngxiào. I learned that specific flowers are associated with each sign, too, as well as moods or tones, so I set myself the task to combine each zodiac sign with its associated flower, in as natural a way as I could, and hopefully to match the appropriate mood. I was not thoroughly familiar with all the flowers, such as cineraria and bleeding hearts, so that took some research.

Each poem is meant to stand on its own, rather than contributing to any kind of narrative. Haiku, as the starting verse for a longer lined form known as renga (or renku, a more modern and less rule-bound evolution), grew out of the tradition of linking from verse to verse but always shifting away--and thus "tasting all of life." I sought to present variety as much as I could, too, even while the flowers and zodiac names added common threads to each of the twelve verses.

As a result, the sequence turns from a violin to a letterbox, from a misty moon to an unfinished painting, from a fireplace mantel to an election, from a vase to a journalist's suit, from an encyclopedia (where the flower is present in name only) to a garden (where the flower is actually present), and finally, from a garden gnome to the concluding abstraction of abundance. Some of the links from verse to verse, such as going from a garden to a garden gnome, may be readily apparent, but other links may not be, such as a violin being a kind of enclosed box, which might obliquely connect to the next verse's letterbox.

I ended with the abstraction of "abundance" on purpose (in contrast to the more concrete images in the other verses). I hoped that the entire sequence would offer an abundance of spices, tasting all of life, with each of the animals, each of the flowers, and each of the other elements I added contributing their own flavours. Individually, too, I hoped that each verse might engage on its own terms. For example, if there's an abundance of hydrangeas, how does that benefit the pig? I do hope that readers will picture a real pig or other animal in at least some of these verses. Perhaps the pig will enjoy eating those flowers!

In many ways the sequence wrote itself, once the structure came to mind, and any mysteries it might have may be beyond my conscious explication. I hope it pleases and stimulates, and perhaps provides zodiac and flower information as well, reminding us of the cycles of life, and perhaps how we can be grateful for each year of our unfolding lives.

The second sequence, "Haiku Lessons," is perhaps more playful. Haiku is widely misunderstood as being anything that fits a set syllable count. But no, haiku do not have to be 5-7-5 syllables in English (see this page at the website I run for National Haiku Writing Month, held for ten years every February--the shortest month for the shortest genre of poetry). Mere syllable counting takes no account of seasonal reference (using a season word or kigo in Japanese), a two-part structure (using, in Japanese, what's called a kireji, or cutting word), primarily objective sensory imagery, and other strategies.

Within this framework, though, haiku can fall into seemingly overused syntactical structures, using all-too-common tropes or images, which I poke a bit of fun at. The poet's challenge is always to keep things fresh, but that can be difficult with poems as short as haiku. How many poems can be written freshly about cherry blossoms, for example? Actually, a lot, but poets will sometimes have to cure themselves of the easiest or most obvious choices (such as equating falling blossoms to snow or to confetti--that's been done to death). It's in this context that I tried to have a little fun.

By some definitions the poems in this sequence are just short poems rather than haiku, but I hope they're at least in the ballpark. I've kept juxtaposition in each of the verses, and often a concrete image and seasonal reference, and then I name various parts of speech, almost as if one could "mad lib" the rest of each verse. In fact, why not give it a try? I also play with various modes of writing haiku in English, such as the pure nature image, abstractions more common in so-called gendai or "modern" haiku, and other variations. As such, perhaps the sequence might offer "haiku lessons." Or maybe not.

The third sequence, "Still I Go," is more personal, written about a time I had surgery. I ruptured my Achilles tendon in February of 2016, was not able to drive for three months, and could walk only short distances with crutches. After a surgery and months of rehab, I was finally able to walk in the woods again. But before then, I was glad I could still visit the infamous cherry trees in full bloom at the University of Washington campus in Seattle, near where I live, even if just on crutches. I wrote the poems for this sequence in February and March of 2016, around the time of my surgery. It took almost a full year to recover fully. And still I go to view the cherry blossoms when I can--taking the opportunity to do so much less for granted than I did before.

I have many other haiku sequences on my website. Of special note is "Avonlea," which appeared in Bacopa in 2016. It was written in 2008 to commemorate the hundredth anniversary of Anne of Green Gables. I use stars on the site to mark other favourite sequences (featuring both haiku and tanka), and if I might recommend a few of them, they would be "Fine Lines" (incorporating lines borrowed from famous poems), "The Haijin's Tweed Coat" (with each verse using names of haiku journals), "Kazooku" (for something fun), "Pop Fly" (baseball haiku), "Separation" (which appeared in Rattle magazine), "Text-ku" (a sequence from 2008, working in younger-generation texting acronyms), and "Thornewood Poems" (a spilling-out of nature poems from twenty-five years ago).

Of course, good haiku don't have to be in sequences at all. Sometimes just a single haiku, all by itself, will do.