Challenged by 2016 Poetry Editor Kaye Linden to write a sestina, initially I thought the form looked too complicated to even attempt. However, in Kaye's recent interchanges with Carolyne Wright, one of the resources mentioned was Obsession: Sestinas in the Twenty-First Century. I immediately bought a copy, and found the contents so exciting I had to try this poetic form described by Carolyne as "a spiral turning inward." 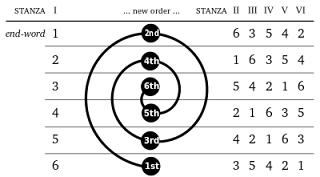 Traditionally, the first stanza's end words are repeated exactly throughout (in the prescribed changing order). But some poets in Obsession bent the rule of exact repetition. For example, in Maxine Kumin's "In Praise of the New Transfer Station" the end word edge reappears as hedge and sedge and in the second stanza (this slays me), "a motley assortment of mohawked Harrys and Eds."

I thought If Maxine Kumin could do it, I can do it, drafted a six-line first stanza, used the sestin-a-matic to determine the location of repeated words, and followed the sestina pattern (after a helpful critique by Kaye Linden, and later by the Gainesville Poets & Writers). Playing around with the first stanza's end words while composing the poem, I came up with these variations: Man/humanity/men/women/humanitarian, jokes/joke's/ joke/Joker, pain/painful, hollow/halo/hole/Hallow's/howl, friends/friend, and weep/sweepstakes:

I cannot deify The Man
who makes jokes,
negates a deeper pain,
hides behind a hollow
laugh. He should be, friends,
the first to weep.

How can he but weep,
hold out for humanity?
Climate deniers, no friends
of earth, deny the joke's
on them, souls too hollow
to sense our planet's pain.

The Pres should feel such pain
he can do nothing but weep.
Instead he hides behind a halo
while radicalized young white men
advance like a fatal joke.
His Hollywood and Washington friends,

his White House correspondent friends,
rather than mirror our certain pain,
retweet satirical political jokes,
while every one of them should weep
for gays, blacks, Muslims, women
going down the alt-right rabbit hole.

This dark ground we tread is hollow
where our Standing Rock Sioux friends,
seeking the mythic Medicine Man,
suffer rubber bullets, cold water, pain
of ignored treaties instead. So weep
for them, too, while Barackobama jokes

with Jerry Seinfeld: You have to joke
about all the stupid stuff. Is this All Hallow's
Eve, world leaders tripping out of their minds? I weep
that Tuesdays he picks from a kill list. And friends,
his admin built more nuclear everything. A painful
question: where is our Nobel humanitarian?

In the coming sweepstakes our dealer's The Joker,
a man whose choices would make Allen Ginsberg howl,*
whose global warming skeptic friends will rewrite psalms to render pain.

*I saw the best minds of my generation destroyed by madness... Moloch! Moloch! Nightmare of   Moloch...  Congress of sorrows!... Moloch whose blood is running money!... Moloch the vast stone of war... whose love is endless oil and stone!...

"My President was Black" by Ta-Nahisi Coates: "...my last conversation with the president. I asked him how his optimism was holding up, given Trump's victory... he said his general optimism about the shape of American history remained unchanged. 'To be optimistic about the long-term trends of the United States doesn't mean that everything is going to go in a smooth, direct, straight line,' he said."