The verb "To be" ("I am," "I was," "I have been," etc.) is the most protean of the English language, constantly changing in form (the word protean's namesake, the Greek sea god Proteus, could change form in an instant--lion, wild boar, snake, tree, running stream).

Thus protean means "versatile," and has the positive connotations of flexibility and adaptability. You'd think writers would find its versatility useful. Yes and no. Search Google for "why not use to-be verbs" and you'll see such articles as "How to Eliminate 'To-Be' Verbs," "Avoid Unnecessary 'to be' Verbs in Writing," and "Not to be: Removing be verbs from your writing."

I'm a "show-me" learner. The first time a fellow writer pointed out the number of to-be verbs in my work, I thought "So?"

Well, "show-me" is in fact the key to improving your writing, a specific version of the "show, don't tell" rule we've all heard. For example, "This cherry pie tastes delicious" is more descriptive than "This cherry pie is delicious." Another example from Gail Radley: to improve "His failure to make the goal was unfortunate," try "Unfortunately, he failed to make the goal."

For a quick and easy way to get a feel for this process, go to Aztekera's "To Be" Verbs Analyzer, where you can paste an entire document and receive a list of sentences containing all the to-be verbs.

I tried it with a flash memoir piece written years ago, "Bread and Butter," picked at random from my Autobiography Passed Through the Sieve of Maya. The result? "54.5% of your sentences have to-be verbs." That doesn't sound good!

Below I've placed in bold the to-be verbs identified by the Aztekera tool. Be my guest: see how you might improve this piece with alternative verbs that "show" vs. "tell."

Young couples used to say "Bread and Butter" if separated by an obstacle when walking together, to keep something from coming between them. This is based on the difficulty of separating butter from bread once spread.

My mother, Ruth, still has an old-fashioned beaded bag my father, Clovis, gave her for high school graduation, and I'm struck by how like her it is: small, pretty, many colorful pieces forming the whole, smooth to the touch but with attitude. I imagine my father fell in love instantly. They were fourteen years old when they met, and neither time nor distance ever separated them in spirit.

I don't know how my maternal grandparents viewed this bright, farm-grown young man, because they died in a car crash before I was born. I can guess they hoped their middle daughter would find a better catch if they moved her away from La Feria, Texas--population 1,594.

Ruth tried to follow her parents' wish that she go to college in Chicago, where her aunt and uncle lived. Once there, however, she schemed to move closer to Texas A&M, where Clovis was studying agriculture. She went to three different colleges in as many years and finally--after her third year away--they were married, with fifty dollars between them.

My father, enforcer of his own rules, scared me when I was growing up. Determined to have his way, he'd paint himself into a corner where to say yes would be to give in, a loss of face he couldn't tolerate. Mom, though, saw through his tough exterior, and would act as go-between--placating me without challenging his decisions.

She has never liked conflict. Even now, at age 102, when we're out together if I walk on the other side of a post in the sidewalk she'll say, "Bread and Butter!" and insist I say it, too.

My parents were not without arguments, however.


Mom and I wear the same size shoe, and on one visit I brought her a pair of discount store stilettos, just for fun. She pranced around in them for Dad, expecting something flirty, I guess. Instead he gave her a dour look and said, "You're not going anywhere with me in those shoes."

Mom wept, I was furious. When she asked me what she could do, I said, "LEAVE the son-of-a-bitch!"

That was out of the question, of course. Until he died at age 69, whenever I visited and walked into a room where they were sitting, I'd find them whispering, Mom on Dad's lap, her arm protectively around him.

Strangers in Their Own Country

Paddy Reid, winner of our 2017 Bacopa Literary Review's Honorable Mention in Creative Nonfiction, recently published an anthology of his stories, Deserted. From the book's Kindle description:

"Ireland has always been a Neutral country. But during World War II, thousands of Irish soldiers left the Irish Army to fight alongside the British forces and their allies, against Germany and Japan.

"These soldiers were 'dismissed' in absentia by the Irish Army and found guilty of desertion. On their return home, instead of receiving a hero's welcome, they were treated as pariahs, outcasts in their own towns and villages. Paddy Reid was a child of this era. His father, also Paddy Reid, was one of these soldiers.

"The stories contained in this anthology have more than a grain of truth to them. In his own beautiful prose, Paddy tells of Ireland during the decades following the return of his Dad. They paint a vivid picture of the hardship and suffering of life during those years, that at times will have you laughing out loud, or reaching for the tissues. His stories are a reminder to us all that life is precious, there is laughter even in the most destitute of homes, and the human spirit is indomitable."
Posted by Mary Bast at 10:10 AM No comments:

The Walls Around the Ring 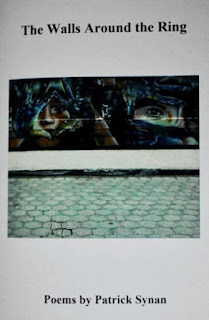 Bacopa Literary Review 2018's Poetry Prize winner, Patrick Synan, has published a chapbook that includes his prize-winning poem, "Outside the Clinic." From his publisher:


It is with great pleasure that The Orchard Street Press announces the publication of The Walls Around the Ring, the first chapbook from Patrick Synan, an exciting young poet from Watertown, Massachusetts.

Mr. Synan, who has previously had work appear in Crosswinds and Bacopa Literary Review, first came to our attention in Orchard Street's Poetry Contest last year. Two of his submitted poems were selected for inclusion in Quiet Diamonds, our annual poetry journal.

We were struck then, as we were with all the other poems in this new collection, by the freshness of the language, the imagery. Patrick paints with new brushes and presents life and experience in an exciting and insightful way. David Dragone, editor of Crosswinds, notes of Synan: "it becomes clear almost immediately that this poet is not satisfied with mere poetic descritpion or good crafting" as "he takes us through an exmination of what one might call the 'geometry of the heart.'"

The pen goes around again
For the students to draw lines
Between their hometowns
And their classmates' hometowns,
The final shape is an imperfect
Circle, whose dips and curves
Record moments within moments,
A handful of facts that alter us
To learn the infinity of others.

The Walls Around the Ring is available for $12 (check payable to Orchard Street) at The Orchard Street Press; P.O. Box 280; Gates Mills, Ohio 44040. Please call us at 330-264-7733 if you have any questions or would like additional information.