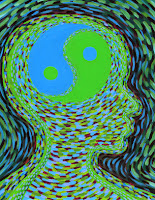 How to Die Happy: An Incentive to Excellence

Here's an example of two paragraphs that justify Andrew Sean Greer's Less winning the Pulitzer Prize for Fiction. While the novel is deemed comedic, one paragraph riffs on Shylock and they both not only deal with aging and loneliness, self-deprecation and all the other attendant emotions, but the language... no other writer compares a human being to a soft-shelled crab; nor does any other writer consider the crab's transparent carapace. Those lines (about Arthur Less, a failed writer) are ones you can die happy after having written:

Once, in his twenties, a poet he had been talking with extinguished her cigarette in a potted plant and said, "You're like a person without skin." A poet had said this. One who made her living flaying herself alive in public had said that he, tall and young and hopeful Arthur Less, was without skin. But it was true. "You need to get an edge," his old rival Carlos constantly told him in the old days, but Less had not known what that meant. To be mean? No, it meant to be protected, armored against the world, but can one 'get' an edge any more than one can 'get' a sense of humor? Or do you fake it, the way a humorless businessman memorizes jokes and is considered 'a riot,' leaving parties before he runs out of material?"

Whatever, it is, Less never learned it. By his forties, all he has managed to grow is a gentle sense of himself, akin to the transparent carapace of a soft-shelled crab. A mediocre review or careless slight can no longer harm him, but heartbreak, real true heartbreak, can pierce his thin hide and bring out the same shade of blood as ever. How can so many things become a bore by middle age -- philosophy, radicalism -- but heartbreak keep its sting?

*     *     *
(The Pulitzer Prize is an annual award for achievements in newspaper, magazine and online journalism, literature, poetry, music, and photography in the United States, funded since 1917, as an incentive to excellence, from the will of publisher, passionate crusader, and visionary Joseph Pulitzer. List of Pulitzer Prizes for Fiction here.)

As many talented writers have insisted, the best way to become a better writer is to read, read, read. Have you read every novel that's won the Pulitzer Prize for Fiction? That might be a good place to start. During National Poetry Month 2013, I participated in "Pulitzer Remix," a project of The Found Poetry Review. Eighty-five poets from seven countries each wrote a poem a day from one of the 85 Pulitzer-Prize-winning works of fiction published to that date, and posted on the Pulitzer Remix website. Toward the River is a collection of my Pulitzer Remix poems from Michael Cunningham's The Hours.

The Light of the Flash: Short Stories and Shorter Stories

The novelist ... does not convey the quality of human life, where contact is more like the flash of fireflies, in and out, now here, now there, in darkness. Short story writers see by the light of the flash; theirs is the art of the only thing we can be sure of - the present moment. Nadine Gordimer (quoted by Karen Lazar in "Writing by the flash of fireflies," 20 Nov 2013, Mail & Guardian)

Last year our short genre was Flash; this year's Short Story genre could also include something very short (at least 250 words), as long as it revolves around a central story core, with tight writing and a powerful voice.

Short Story Editor Kaye Linden has written, "You want the reader to get in and get out, the emotional impact of the words resonating beyond the words." In Chapter 2 of 35 Tips for Writing a Brilliant Flash Story (also included in a former blog post), she describes the House Theory:


The Novel Analogy: You approach a house in the neighborhood. The family invites you for dinner. The evening offers stories, entertaining characters, conflicts, discussions, and new people. After going upstairs to the bathroom, you sneak a look in the closets and find out how these people live. Are the clothes organized and meticulously hung or are they crammed together in disarray, piles of dirty laundry on the floor?

Short Story Analogy: One evening, you notice the house living-room windows are open and the lights are on. You peer in, able to view only one room, let's say the living room. You hear the conversations and arguments, and witness the character interactions and current events as the characters sit around a coffee table. You recognize a few of the people from dinner the other night and remember one or two of their stories. Your view is limited to the living room.

The Flash Analogy: Tonight, like a voyeur, you peer into the keyhole. The lights are on. Observe the living room happenings through the narrow keyhole frame that limits your view to one tiny fraction of the room.

Here's an example from last year's Flash genre that meets the above criteria and would work just as well for this year's Short Story. Kaye Linden described Chelsea Ruxer's "Purple Light" as "lovely in its pale imagery and nostalgic mood, a small piece that suggests with power."

The walls won't stay one color. The light changes them through the day, and the whites we started with in their fresh little squares have turned grey and green, and even brown up in the creases of the crown molding.
I hold the paint card under the lamp, remember buying it the night we closed on our first house together. We ran our fingers along the bumpy edge of the shade, hundreds of triangles of colored glass I thought could go anywhere.
I look around the room, hold the little white cards up to the mantle and imagine what this should be. The lamp brings out the blues in my sisters' bridesmaids dresses and Angie's graduation robe, dark greens from Ka'ala, pinks in our smiles there and in Angie's first picture, her skin blotchy against the crisp sheet of the hospital bed.
The painters will come again in the morning. Maybe we'll change the trim this time, or the ceiling. They won't stay long enough for the light to change.
I hear his phone ding in the kitchen just before a flash of turquoise illuminates the wall behind it. It's a color that doesn't go. The light brightens for a moment, a notification box on the screen. Then it disappears. It always does, if you just leave it alone.

The sun through that window is blinding now, but the light will soften. I stay long enough to watch it turn from the slanted golds of late afternoon to sweet reds that get sucked into amber and then those few, funny moments of purple before a shadow falls across the table and the sky sinks into the deeper blues of the night, when the window just shows me.

(Chelsea Ruxer is an MFA student at the Bluegrass Writers Studio. Her work has been published in 5x5, Adelaide, Flash Fiction Magazine, Jellyfish Review, Hermeneutic Chaos, Jersey Devil Press, Maudlin House, New Pop Lit, The Airgonaut, and others. One of her short pieces was nominated for 2016's Best of the Net)

Prose Poetry: Powered by More Than One Source


Prose poems are pure creation, the playful and daring edge of poetry. The writer provides powerful language and, above all, a truthful voice. Kaye Linden, 35 Tips for Writing Powerful Prose Poems 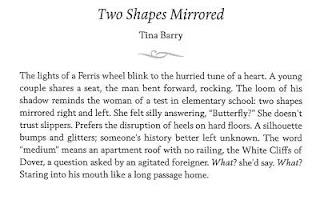 Prose poetry is a hybrid and, as with any hybrid, is powered by more than one source. It resembles prose in its lack of line breaks, but still is image-driven and with other poetic attributes such as meter, rhythm, rhyme, imagery, metaphors, sounds, and the powerful lyrical language we associate with poetry. This photo from page 17 of Bacopa Literary Review 2016 shows Tina Barry's "Two Shapes Mirrored," a doubly appropriate title for a prose poem.

Another example of  prose poetry we admire is Leslie Anne Mcilroy's "Big Bang" (Second Place Prize in Bacopa 2016's Poetry genre), described by Kaye Linden as "not only playful in form but edgy and courageous... clever handling of a highly creative and unique theme in which each planet of the solar system is personified" (the word Syzygy, from ancient Greek "yoked together," in the first of 12 stanzas in "Big Bang" refers to the alignment of sun, moon, earth, as in an eclipse):

More than once, the sun and the moon doing things they've never, trading light for dark, all eclipse and aerial acrobatics. The stars, blinking with confusion, bumping into clouds in broad daylight, dawn and dusk dancing in drag, roosters crowing at twilight and me, here at the window, waiting for a universe.

A third example is Laura Madeline Wiseman's prose poem, "Under the Frankincense Trees," accepted by Kaye Linden because, "The profusion of imagery will offer a unique and unusual fantasy touch to Bacopa" (follow this link to read Wiseman's work).

We're drawing near to the May 31 deadline for submissions to this year's contest and already have some fabulous prose poetry, with room for a few more.

Don't be limited in your imagination. The above examples provide some idea of the range of work we publish in prose poetry, but as Kaye Linden indicates in 35 Tips for Writing Powerful Prose Poems, prose poems offer "a fantastic trampoline to bounce around creativity."

Dive Beneath the Surface


The world is satisfied with words. Few care to dive beneath the surface.
Blaise Pascal

First-class writers share an enviable knowledge of human nature through deeply drawn characters that illustrate not only what the world sees, but what lies beneath the surface and leads to a unique point of view.

Below are steps to dive beneath the surface, as suggested by Larry Brooks in "Three Dimensions of Character Development," using Sarah Woodruff as an example: