Reading Between the Lines

For our 2016 Bacopa Literary Review poetry entries, Kaye Linden requested "an experimental poem, a different angle, a refreshing perspective that weaves poetic language and techniques into fixed or mixed forms."

In one of the most imaginative poetic formats we published, Bill Waters selected words from a page in the Charles Dickens novel A Tale of Two Cities, then superimposed the found poem over the original text (the literary equivalent of a collage, found poetry refashions and reorders existing texts).*

Reading Between the Lines
of A Tale of Two Cities:

More months had come and gone.
Young men cultivated a taste for English,
and ruined nobility soon became acquainted
with the circumstances of exalted expectation.

The visual quality of Bill's artistic design below doesn't come close to the printed page (go to our Amazon.com page and click on "Look Inside" to view the original), but I want you to see the inventiveness of this work: 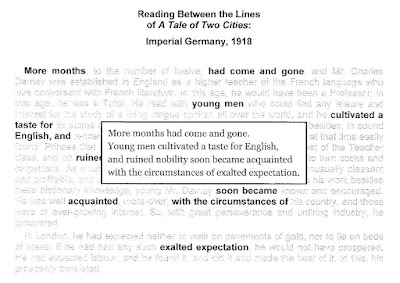 Bill Waters is known mainly for his Japanese-style micropoetry (see Tiny Words for examples). In addition to found verse, he also writes ekphrastic poetry and very short prose. Among his many recent publications are "Rodney Dangerfield Meets Oscar Wilde: A Mashup in (Sort-Of) Triolet Form" (Poetry WTF), "Beam Walking" (Miriam's Well), "The Now and the Not Yet" (The Ekphrastic Review), and an art and poetry chapbook The Luzajic Variations,  Bill lives in Pennington, New Jersey, with his wife and three cats.
_____________________________

*For some years The Found Poetry Review was a leader in this form. Each year they had a National Poetry Month initiative (here are my examples from April 2015). Of their annual challenges, my favorite was April 2013's "Pulitzer Remix," when I was one of 85 poets from seven countries posting a found poem a day based on one of 85 Pulitzer Prize-winning novels. My source, Michael Cunningham's The Hours, eventually became Toward the River.