Bacopa Literary Review: The Art of the Start

"Hand half-way to the cafeteria door, I'm listening this morning to the noise off the lake, a small, dirty one with a carillon like a fist rising straight up out of the water. I'm thinking: the swans must be at it again."

Why did I smile in the few seconds it took me to read this opening paragraph of "Ducking" by Emily Hipchen? Because -- with only two sentences -- she brings us into action, surrounds us with deftly drawn images and sounds, gives us a glimpse of the narrator's character, and propels us forward with the desire for more.

From this start, you can see why Emily Hipchen won a Creative Nonfiction prize in Bacopa 2014. And you won't be surprised to learn she's Dr. Hipchen, a professor at the University of West Georgia, and teaches creative nonfiction. There isn't room here for all 2,343 words of "Ducking" (and this story alone is worth the price of our 2014 edition), but I'll quote enough to show how artfully this story builds from the beginning, then brings us back, having gained new insights along the way.

Our narrator expects violent action from the swans. Though "beautiful, serene as cats, smooth as women," they're "bitter and angry and not to be trusted. . . The children stand near the water tossing bits to a mixed bunch of ducks and swans, but when the food is gone, the swans nip whatever they can catch. . . a bit of skirt, a t-shirt tail, a little chunk of leg."

But she's disturbed to find the swan noises today are reacting to a little duck ten feet out. "She splashes, quacks, flaps her wings to fly or swim but just beats the water into the air. She goes nowhere but under, coughing and quacking and fighting. Then a second duck bobs up. . . large and sleek, its wings and feet kicking the water into turmoil. The two birds writhe and struggle, the larger one on top using its bill like a ball-peen hammer, pounding the little duck's nape. Like a blacksmith. Like a wind-up toy. They go under. The one on top quacks, slips, submerges. . . comes up and goes under and swims frantically for somewhere it won't drown. It calls out and calls out, but this only brings more big ducks. . . 'They're going to kill her,' I say out loud, though no one's there. I shout Hey, cut that out!"

She thinks: I could save her and charges "right over the dirty fringe of grass and muck and trash straight into the lake. It's just past winter. The water sinks into my shoes like a fall of pebbles, fills up my socks grabs my calves and thighs and sex and then, with a tentative tongue, laps my navel."

This is brilliant, throwing in a bit of sexy language to (spoiler alert) foreshadow a story that features ducks, well, ducking.

Of course this story is so much more than its obvious features. With only a few words the author takes us more deeply into her own character: "I stand there, big and strange. Me upright like a pillar in the lake, that has to mean something. . . I stand up to my waist in the filthy lake, working on being satisfied that at least she won't die. That she will be safe as long as I stay there, watching."

Hipchen skillfully connects the present to her past, as she recalls her only experience with ducks, when her father comes home with "coolers of dead fowl" for her mother to prepare for eating. "She hates those ducks, her hands in their cold, wet feathers, her hands in their insides pulling out pink and black and grey things, goop to throw away, wads of yellow fat slick as eyeballs. . . ."

Notice how every sentence draws us symbolically and emotionally into an interplay of external events and internal awakening, and does so with poetic rhythm and rhyme: "But the lake is cold and dark with muck and my lower body begins to numb. I tuck my hands into my armpits, watch the poor little duck swimming away for another moment, then turn around and wade out. . . ."  And later, "I had no idea, saw nothing the way it was, knew nothing about the way things are. I didn't know the little brown duck wasn't dying, wouldn't die, would nest and lay eggs and raise ducklings, and do it all over again come next spring. . . By now they were at it again, in fact. I imagined her down in the muck, the bloody moustache of feathers, the riot and violence and calling out."

Finally, "Ducking" teaches us the importance of a good ending. Some writers refer back to the beginning, or offer a final quote or revelation. Emily Hipchen does both. "She didn't need saving anymore than I did, couldn't be saved, shouldn't be saved, didn't want saving. . . I got my umbrella from the stand. My laundry would wait for after lunch, I thought, though the room stank of it already."


Twice nominated for the Pushcart Prize, Emily Hipchen is a Fulbright scholar, an NEH grantee, and editor of "Adoption & Culture: The Interdisciplinary Journal of the Alliance for the Study of Adoption and Culture," as well as co-editor since 1999 of "a/b: Auto/Biography Studies." She publishes essays in autobiography studies (with a sub-specialty in adoption life writing), and is the author of a memoir, Coming Apart Together: Fragments from an Adoption. Her essays, short stories, and poems have appeared in many publications including Arts & Letters, Baltimore Review, Cincinnati Review, Fourth Genre, Georgetown Review, Hippocampus Magazine, and Northwest Review. Her story "Gator Bites" was Nonfiction First Runner-Up in Solstice Magazine.

The term beatitude comes from the Latin noun beātitūdō which means happiness or blessedness. In Christian theology the Beatitudes are eight blessings that echo the ideals of mercy, spirituality, and compassion. Third Place Poetry winner in Bacopa Literary Review 2014, Jonathan Travelstead, has mercifully blessed us with a view of earth from an astronaut's perspective, where we see Beatitudes / scrawled in the mountaintops, where heartaches look beautiful and even war looks like a lover's quarrel.


What the Astronaut Said

From a distance the world looks blue and green--Julie Gold

Goodbye, blue jaw-breaker.
From up/down here
your heartaches look beautiful.
Bodies pendulous from trees,
ripe as grapes.
Mirrored banks aching towards heaven.
Even war looks like a lover's quarrel,
two opposing bodies
twittering little red lights
across the ocean
while the sun like a fat kid
hides behind a billiard ball.
From this distance
I see Beatitudes
scrawled in the mountaintops:
You own nothing. Leave only footprints.
Now a fugitive to this petty world,
how could I return to it?
Goodbye, sea monkeys
in a blue sandwich bag.
Goodbye, fear of abandonment
and anger issues.
There is no economy here
and it's so quiet
I'm getting to know myself better.
Wish you were here. 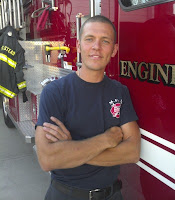 Jonathan Travelstead served in the Air Force National Guard for six years as a firefighter and currently works as a full-time firefighter for the city of Murphysboro, and also as co-editor for Cobalt Review. Having finished his MFA at Southern Illinois University of Carbondale, he now works on an old dirt-bike he hopes will one day get him to the salt flats of Bolivia. Winner of the 2013 Cobalt Prize for his poem, "Trucker," Jonathan's many publications include Alexandria Quarterly, Autumn Sky Poetry Daily,  Baltimore Review, The Oneiric Moor,  Sixfold, and The Boiler. His first collection, How We Bury Our Dead, published by Cobalt Press, was released in March, 2015, and Conflict Tours is forthcoming in Spring of 2017.

Bacopa Literary Review: The Heat of the Blues

In an earlier post, we likened creative nonfiction to jazz, "always with a moving inner voice. . . as experimental as other forms while remaining grounded in fact." Melani's voice is musical, even breathtaking. Her writing captures the best of the blues: "While blues lyrics seldom turn to happy topics, they are often uplifting, empowering. . . a way of dealing with sorrow, rather than wallowing in it."

Her very first sentence rings a chord on which she improvises throughout the piece:


Surrounded by desert, my city was lifted out of caliche.

Martinez describes how she and her brother "lived some independence on downtown streets. . . left to our own thoughts."


In the summer, those thoughts were most often blurred by desert heat.

Still being drawn in, we learn about her father's restaurant, El Rapido. Notice the rhythm in the author's simple naming of foods:

We readers are surrounded by heat. The food, the air, and an encounter in Tucson's Old Town, where she and her brother "often delivered to a Navajo silversmith there, an older and friendly man who liked my father's red chile." On her last day of work before beginning high school,


I was a pretty girl on that day. . . This teenage threshold made me glow, and the shine on me stretched out many inches from my skin. . . He pulled me close without letting go, his face close to mine. . . his heavy arms bound me, sealed me in silver bracelets. I was calcified there in the shadows of concrete walls and steel piping. My glow was eclipsed. I found myself unable to move or get away. Then he pulled me in hard to kiss me and I suddenly jerked. He released his embrace. . .

At no time that day, that week, that decade did I tell. Not my mother, my father, nor my brother. Like steam, my memory of it floated away into invisible vapor, and hung in the air over my head. Some of it I swallowed down, but still it managed to shoot out my fingertips, my eyes, my breath.

Mele Martinez holds us in thrall, her blues a way of dealing with sorrow but never wallowing, including the last paragraph, where she is at the top of Sentinel Peak:


There I'd sit quietly and contemplate all the fourteen year old girls who got burned like this--the ones who don't tell. And as I waited, on the horizon I'd see thunderclouds and the smell of sprinkled creosote bush would fill my lungs. Soon, I was pounded with late summer monsoons that always came to wash out the roasted earth and drench all of us who find ourselves on spigots.


Melani (Mele) Martinez lives in Tucson, AZ, where she's a Community College Adjunct Instructor and works on her book-length manuscript about her family's Mexican food store. She is co-founder of Flamenco del Pueblo Viejo and instructor at The Flamenco Studio. She and her husband, Jason Martinez, partner with Casa Vicente to present Tucson's Annual Spanish and Flamenco Festival.