Reflections on "Drunk and Digging"

My poem, “Drunk and Digging,” in Bacopa Literary Review 2020 is one piece in the poetic, literary montage entitled “THE FLYING BUSMAN: an urban poem of dramatic potential,” and, like all entries in the 185-page manuscript, a snapshot of a day-in-the-life of a transit bus driver. 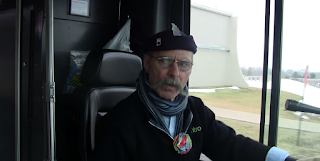 “Drunk and Digging” happened exactly as depicted in the poem. It was a funny moment of frustration and surprise, a confirmation of the infinite potential of the unexpected! I had never seen this particular rider before and never saw him again.
But, somehow, those short, fragmentary interactions leave a deep impression. Remember-ing the incident and rereading the poem now, that brief bus trip assumes a wholeness of vision that gives a nutshell version of a bus driver’s life. A holler becomes a hoot, and the seriousness of proper and improper, right and wrong, find their dissolution in a disheveled drunk.

Mickey "The Flying Busman" Mahan's poems--after three decades behind the wheel of a transit bus, writing on a pocket-size memo pad WHILE he drives, pen-in-teeth (he calls his writing practice "Writing On the Edge Of My Seat")--have raised an itch the driver's seat can't scratch. So, away they go!