Blood in the Asphalt, by Jesse Sensibar 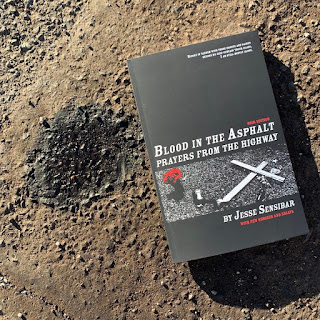 Jesse Sensibar, contributor to Bacopa Literary Review 2019, has a new book  of poetry, photography, and memoir, Blood in the Asphalt: Prayers from the Highway, shortlisted for the 2019 Eric Hoffer Award Grand Prize.

"We are so often moving at breakneck speed, and this book is that rare thing, a quiet, commanding voice that says, stop. Stop, and notice . . ."  Carolyn Guinzio, author of Ozark Crows.

"Jesse Sensibar is a son of anarchy who crosses over the road and pauses to respect the lost, preserving their memory and laying bare his own mortality . . ." Brian Jabas Smith, author of Spent Saints & Other Stories.

Sensibar's Creative Nonfiction work in our 2019 issue shows the emotional power that can be packed into a few, well-chosen words:

Mi Madre tattooed across your clavicles at the top of your breastplate, and in her 3rd Street apartment she slapped your five-year-old face in rage anytime you called her mom.
Me, putting on orange-and-white-striped cotton, my best collarless cowboy shirt, and talking to the judge. How surprised everyone was when she gave us a chance and released you to me.
Both you and that blue Spanish Star .45 automatic I kept in my top dresser drawer were gone. Your betrayal hurt, but your mother's satisfied laughter hurt a little more.
Seeing your face named Tucson's Most Wanted on the side of a city bus. Hearing how you stuck him in the neck with a hollow metal table leg. They said he bled out fast on your Wilmont Prison classroom floor.
Four-thirty a.m., sitting across a round dining room table in flipflops with a highway patrolman your age. He'd come to tell me how you'd died.

I was glad it was not an expensive gun.

*  *  *
Jesse Sensibar spends his time writing and promoting the art of storytelling. He helped develop the Narrow Chimney Reading Series, has been a judge for poetry and play writing awards, was a Visiting Author of Arizona State University, and served as executive director of the Northern Arizona Book Festival. He has received awards for play writing and creative nonfiction and his poetry and prose have appeared in more than 40 publications.