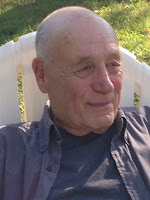 I am 83 years old, have been a writer all of my life, but in the last few years have seen a distinct reduction in my creative energy, my discipline and, most of all, my inspiration. All that remains, essentially, is the habit.

Still, I try and, this year, discovered a new approach. With a huge store of unpublished, unfinished, unsatisfactory stories, I decided to go back, look them over, rethink them and see if, with increased maturity, a new viewpoint, less anxiety, I could make them work.

"Shiva" is one of the results of this experiment. The original story was, as it still is, about my mother's funeral. It was about the way the family translated sorrow into rage. Only in the original, there was a central plot which crystallized what I was saying in dramatic fashion. Trouble was it was totally unbelievable and forced.

So, in the reworking--and in the new freedom I was finding to throw things away--I cut this center right out and just left the fringes, the senseless anger, the yelling, the background. I have always been a traditional writer. My stories always have had a strong sense of plot; a beginning, a middle, an end. Here I found a story that seemed scattered, that had no real plot, no definable center. I thought it was the strangest thing I had ever written--yet, I could see at once that it worked. Bacopa accepted it almost immediately.

My mother's funeral was sparsely attended. She had done so much complaining in her final years that most of her friends had drifted away. She blamed it on my father, who had grown crazier as he got older . . .
Where were all those old ladies now? Where were their kids? My parents had spent every summer at the beach with the families of my father's pals from the local Tammany Hall Club. Why weren't they here? I was furious with them all.
I was even furious with those who attended, especially my Aunt Celia who herded guests into cars and barked instructions and whispered cues to my father. . .
"One thing Dot had was taste." Celia's voice filled the pause. "She knew exactly what went and what clashed and what fabric and how much. If you were decorating, you went to Dot before you went to Bloomingdale's! . . .
"When he first met Dot," sang Celia, "all we heard was how she was the best stenographer in his office . . ."
"With her hats and her rings! Dot was the fanciest lady in the world!"
"Pop, I want you to shut your sister up. My mother is not yet cold in the grave and she is defiling her memory!" . . .

I tried it with another one, "Golden Boys and Girls," with similarly successful results which can be viewed on the web site for Porter House Review.

Edward M. Cohen, recipient of grants from the N.E.A. and N.Y. State Council on the Arts, has published a novel ($250,000, Putnam), nonfiction books (Prima, Prentice-Hall, Limelight Editions, SUNY Press), more than 35 stories in literary journals, and articles in Cosmopolitan, Child, Parenting, American Woman, and Out.