"Imitation is the sincerest form of flattery." But there is certainly a great deal more to imitation than flattery. "Mirror," "imitation," or "adaptation" poems, rewrites of well-known poems with slight but pivotal changes, are referred to by many names that betray different attitudes. They all share the flattery of using the original poem as a form to work with--but to different degrees, they can also include elements of parody, criticism, and, of course, competition--the attempt of adapting poets to perform the original poem better, or at least differently, from their own unique perspective.

In my poem, "A Supermarket in Brooklyn Heights," I adapt Allen Ginsberg's well-known poem, "A Supermarket in California." In my adaptation, I compare the works of two important Jewish Modernists: Allen Ginsberg and Louis Zukofsky. The two are contemporaries (although Zukofsky is 22 years older), and they redefine American identity in different manners. Ginsberg courageously discusses his gay identity (hence his reference to Walt Whitman) while providing only scant and sporadic references to his Jewish heritage. Zukofsky, with equal courage, provides extensive and erudite references to his Jewish heritage, creating a model for Jewish American poets that followed him.

Of course, there are other themes in this adaptation as well: West Coast versus East Coast, spectacle versus textuality, and my own perspective as an immigrant who is unable to share the optimist national statements that are made by Whitman and Ginsberg (click on image for a clearer view): 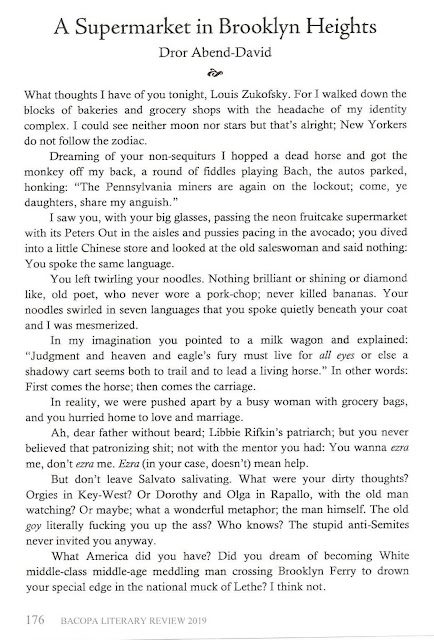