Ekphrastic response to the Peter Breughel painting of Landscape With the Fall of Icarus. 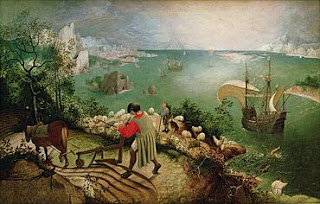 after such grandeur. Flying high in the sky next to the sun only to fall down in grace, fall down down slowly at first, tediously tedious when air currents waft his frail body back up up towards the sun only to surrender him down down to fall again, down towards earth in a tilting tumbling somersault that at another time might have felt like such fun but only if he could stay just in that moment and enjoy the ride up and down, but a crow laughs at his fall and Icarus wakes to the screeching in-between of sky and water and looks down (he should never have looked down) to see his face stare back from the water, mouth wide open in a silent scream soaring from the depths of his gaping throat, blue eyes staring, lengthy blonde curls floating around his head like a parachute, but not a parachute, a liability when water wets hair heavy weighing it down as he falls into his reflection, titillating upon the water, hearing the first drop, the second drop of the first splash, now hearing his voice high, tight calling for help, but the ploughman, the picnicker, the little child with a kite, turn to see the stupid disturbance from a stupid boy who really believed, really believed he would never die, that escape from a labyrinth meant wax wings waxing solid forever, that escape from prison meant playtime with sunbeams, not sliding down sunbeams, and the people look away look away from the red- faced god falling into human condition, the wide-eyed culprit who hits watery concrete, regal wings just behind his white legs, until his calls for help gurgle gurgle gurgle

and the world returns to its state of being the world again,
looking away.